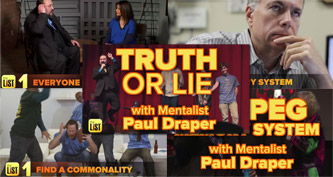 “What lies behind us and what lies before us are tiny matters compared to what lies within us.”
-Ralph Waldo Emerson

Welcome to April’s “Mysteries of the Mind” monthly newsletter!

“If civilization is to survive, we must cultivate the science of human relationships: the ability of all peoples, of all kinds, to live together in the same world at peace.“
– Franklin D. Roosevelt

This newsletter is packed with more immediately useful information and powerful tools than any newsletter I have ever sent out. This may be one that you want to bookmark to visit a few times.

If you missed any of my MASTER MIND series on LIES, PERSUASION, and MEMORY skills that played around the country on ABC, all of the links are now posted and available! Each quick segment is two to four minutes long, and they are all available here:

How to Catch a Liar:
Watch Here

The Power of Persuasion: 3 Ways to Get What You Want:
Watch Here

3 Fun Ways to Improve Your Memory and Sharpen Your Mind:
Watch Here

Last month was Women’s History Month, and I was part of an amazing podcast series celebrating women in history whom we have never heard of but need to know about! The podcast is called “What’s Her Name?”. They started their March edition by focusing on the life of the great magician Adelaide Herrmann! I hope you enjoy this as much as I enjoyed the research and interview.

Adelaide Herrmann’s stage act was the most popular in the world in the early 20th century – she was more famous than Houdini! – but she has since been almost entirely forgotten, even by the magic community itself. Learn why her name has been virtually lost to history (it’s not what you think!) and discover the story of this remarkable, courageous, innovative pioneer with a 50-year career in the world of magic.
Read

If you love that, you will also enjoy special bonus audio from the interview discussing the progress and problems of women magicians in the magical community today!
Listen Here

How many of you love Geek & Sundry? It’s the YouTube channel that was started by actress Felicia Day. They now have a big line-up of shows, and I received special permission to film an episode of their show LORE-MASTERS at the Magic Castle: Discovering Magic with Paul W. Draper! Don’t miss the results of Ryan Green’s clandestine trip to the Academy of Magical Arts’s Magic Castle.

Artist Jim McGee has been commissioned by my hometown arts council in Holladay, Utah to make ten different five-foot-tall murals of people from this sweet little area. Each of their images will be accompanied by stories from their lives as they relate to the town. My story begins with discovering section 793.8 at the local library! I will share more photos of his art in future newsletters as he sends me updates of his work.

Here is a blog that showcases some of his other murals created for a local Catholic church. See Showcase

When it is time for your group to gather and celebrate, remember that I am available for corporate banquets, trade shows, morning energizer meetings, and events. I’m never too busy for your referrals.

“Every individual has a place to fill in the world and is important, in some respect, whether he chooses to be so or not.”
-Nathaniel Hawthorn

Cosi fan tutte is now playing at the New York Metropolitan Opera! “A winning cast comes together for Phelim McDermott’s clever vision of Mozart’s comedy about the sexes, set in a carnival-esque environment inspired by 1950s Coney Island. Manipulating the action are the Don Alfonso of Christopher Maltman and the Despina of Tony Award – winner Kelli O’Hara, with Amanda Majeski, Serena Malfi, Ben Bliss, and Adam Plachetka as the pairs of young lovers who test each other’s faithfulness. David Robertson conducts.”

I was a casting consultant on this production thanks to Arthur Lazalde, who is currently the understudy for the Strongman and Tall Man. A few of my talented freak show friends were also cast in this beautiful production.

Since college, I have been fascinated by the story of the first American-born magician, Richard Potter. There is a small town named after him in New Hampshire that I recently visited. He is hailed by historians as the newborn nation’s first true celebrity (two hundred years ago!), yet few remember him today. Remarkably, he was also the son of a slave and was still able to draw huge audiences to see his magic and ventriloquism shows in both the North and the South even before the Civil War! I first learned about him in a great book called Magical Heroes: The Lives and Legends of Great African Americans Magicians, but I was delighted to find and purchase a new book about his life during my trip!

Thank you to Andrew Pinard for taking me to the gravesite and regaling me with stories and performances of magic from the turn of the last century!