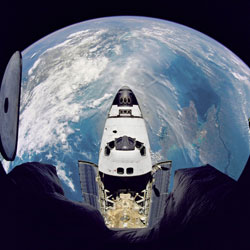 “Whatever you do, do it with all your might. Work at it, early and late, in season and out of season, not leaving a stone unturned, and never deferring for a single hour that which can be done just as well now.”
-P. T. Barnum

Welcome to July’s “Mysteries of the Mind” monthly newsletter!

Fantasy Books, Shuttles and an Apple.

Fantasy Books: I began reading Harry Potter in 1998 – the year that I started University. I was 19. Now at 32 with the final movie viewed in IMAX 3-D and having already visited the Wizarding World in Florida, the journey has ended.

So, rather then morn, I asked 5,000 of my friends and contacts “What’s next?” And here for your reading pleasure are some of their best suggestions for fans (like me) of magic, mystery and fantasy …

Please reply to this newsletter and share some of YOUR favorite books for this summers reading list!

Shuttle: As a child, one of my fondest memories was being in charge of Mission Control in the simulations at the NASA Space Station while attending Space Camp. I always dreamed of going into space or working with the brave and brilliant men and women who did. I am sad to see the end of the NASA Shuttle program but have enjoyed watching it and the international space station fly overhead. Enjoy the link below and watch the skies.

An Apple: Though I didn’t work with NASA engineers this month, I did get pretty close! In July I was honored to be asked to lead workshops and 1 on 1 trainings at:1 Infinite Loop Cupertino, California: The corporate headquarters of Apple Inc.

Working with the minds of high level Engineers and software designers was a whole new challenge for me. They think and experience the world in a very unique way that separates them from the rest of us.

In one segment of my presentation I teach the audience how to develop a super memory. In this piece I ask individuals to throw out words for me to remember. The average audience offers words like: Harmonica, salisbury steak and Paris. However, after my first show for Apple employees and their families, my new words for the month include: “anatiferous” and “zygodactyl” . Yes, I had to look them up!

“Mystery creates wonder and wonder is the basis of man’s desire to understand.”
– Neil Armstrong

Wonderful free app on iPhone called GoAtlantis, which lets us follow the final American NASA shuttle and the international space station. It will also let us set up an alarm to remind us when to go outside and look in the sky (and where to look) to see the light reflect off of these marvels of science and engineering. 🙂 Get app

If you don’t have an I phone, you can track the mission here

Thank you to Andrew Norstrum in Montana for sharing this link with me.

Paul to appear this summer on National T.V. show on Oxygen and I hear that they are running re runs of my episodes of House Hunters on HGTV.