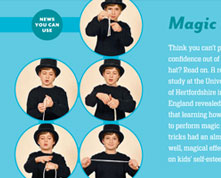 Welcome to March’s “Mysteries of the Mind” monthly newsletter

The idea that one can be as “mad as a March hare” playfully presented in Lewis Carroll’s Alice in Wonderland tea party above originated in literature far before Carroll put pen to paper. It dates back to at least the 1500s , in the poem “Blowbol’s Test,” where the poet wrote:

Then they begin to swerve and to stare,
And be as brainless as a March hare.

Why did the early Europeans call the March hare mad? Because hares during this season behave strangely and excitedly, as it is their breeding season. This odd behavior includes: boxing at other hares with their front paws, jumping vertically for apparently no reason and generally displaying wild behavior.

In March we wear green and drink to Saint Patrick, give vices up for lent, celebrate on Fat Tuesday, dine on cookies and dress in costume for Purim. Spring is upon us and we want to stretch our wild side.

The lion’s bite of winter starts to fade away as March begins and by the end of March the soft lamb like spring should be clearly upon us. The animals will be coming out of hibernation, the sap will be flowing again in the forest, the robins will return and the buds on trees and flowers will begin to bloom.

It is very clear why the early Roman’s made this time their new year. Step outside on a sun filled moment this month, take a deep breath and restart your mind. Life is returning to the world, the hard winter is over. Time to jump vertically for no good reason and release your inner March hare.

I am now and always your friend,

Don’t wait until everything is just right. It will never be perfect. There will always be challenges, obstacles and less than perfect conditions. So what. Get started now. With each step you take, you will grow stronger and stronger, more and more skilled, more and more self-confident and more and more successful.
– Mark Victor Hansen

Grab your current issue of Disney’s FamilyFun magazine. I appear this month talking about my study about how learning magic can help shy children break out of their shell and gain confidence.

Think you can’t pull confidence out of a hat? Read on. A recent study at the University of Hertfordshire in England revealed that learning how to perform magic tricks had an almost, well, magical effect on kids’ self-esteem. Researcher Richard Wiseman attributes the effect to the emotional rewards that come from mastering a trick and performing it successfully in front of others–both of which require practice and self-discipline.

Another benefit: “Performing tricks encourages kids to interact with family and friends, which hones social skills,” says Paul Draper, a cultural anthropologist and professional magician in Las Vegas, Nevada. To help your kids master some tricks of their own, turn to page 82 -86. Magic Boosts Kids’ Confidence

Soldiers barking orders at each other is so 20th Century. That’s why the U.S. Army has just awarded a $4 million contract to begin developing “thought helmets” that would harness silent brain waves for secure communication among troops. Ultimately, the Army hopes the project will “lead to direct mental control of military systems by thought alone.”

If this sounds insane, it would have been as recently as a few years ago, but improvements in computing power and a better understanding of how the brain works have scientists busy hunting for the distinctive neural fingerprints that flash through a brain when a person is talking to himself. The Army’s initial goal is to capture those brain waves with incredibly sophisticated software that then translates the waves into audible radio messages for other troops in the field.